Two intriguing papers that came out this week suggest that one source of the differences sometimes observed between the immune systems of human and laboratory mice are due to variations in the microbial exposure history of the two hosts.

Laboratory mice have long served as a valuable model for understanding how complex biological systems work (see: introduction to our research). And without the power of this model, our understanding of Immunology, mammalian genetics, cell biology, physiology etc. etc. would be fairly superficial and limited to correlative and/or in vitro observations . However, mice are not humans by any stretch of imagination â€¦ And, not surprisingly perhaps, some therapeutic strategies devised using mouse models may not work when applied to human conditions without an intervening layer of optimization for human-mouse differences. The challenge then is to identify the sources of these differences. In the context of the immune system, the two papers below allow us to factor in one such variable â€“ i.e. the multitude of prior microbial exposures that humans have had as opposed to the relatively sterile life that a laboratory mouse lives.

Compared to humans, T cells in lab mice have a relatively “quiet” phenotype with fewer proportions of effector and memory cells. But lymphocytes isolated from mice that were wild-caught (feral) or bought from a local pet store have compositions that mirror those isolated from “wild-caught” humans. Interestingly, subjecting the lab mice to multiple microbial exposures – either using defined microbial pathogens OR just putting them in a cage with mice from a pet store (with all the microbes they carry) – now allows the activated phenotype cells to accumulate in lab mice. Of course, this is only one of many differences between a furry, tailed, 4-legged mammal and a clothed, upright walking, fast-food eating one…. but its an important one. 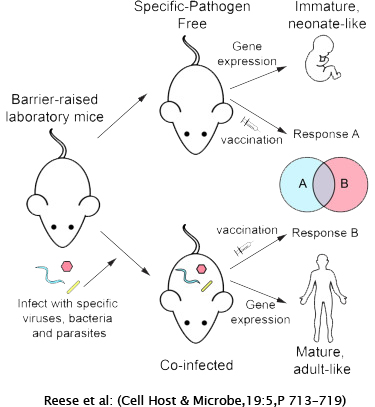